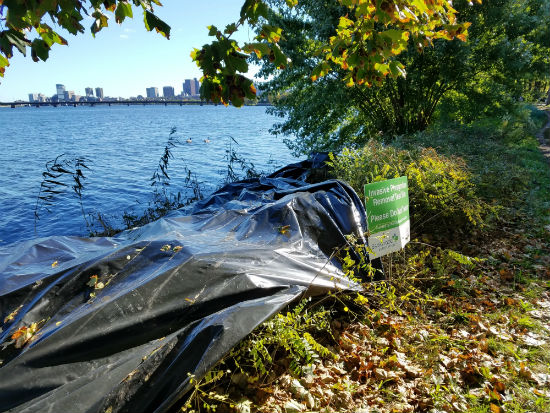 In 2017 and 2018, the Esplanade Association partnered with SŌLitude Lake Management to study the impacts of four treatment strategies to eradicate Phragmites (Phragmites australis) from the Charles River Esplanade. Phragmites is an invasive plant species that appeared in the U.S. in the early 19th century. It is extremely prolific, causing significant environmental, recreational and economic harm. Since then it has spread throughout the US, outcompeting native species, resulting in damage to native ecosystems, and impairing recreation along waterways. Over the last few years, Phragmites have spread throughout the Charles River Basin. The grass will continue to spread, dominating the river’s edge, unless steps are taken to eradicate existing stands and reduce continued propagation.

The study determined that cutting and cutting and tarping Phragmites had little to no impact on reducing the size or density of the stand.  These plots experienced regrowth within six months and rebounded stem density. Overall, all herbicide- surfactant pairings reduced Phragmites stem density with regrowth only occurring in a single quadrat of one plot.  There was minimal impact to non-targeted plant species. Soil and water herbicide residue was not significant.

The results of the Esplanade Association Phragmites Study will be shared with Department of Conservation & Recreation and other Friends group to preserve our native river ecosystems for all to enjoy.