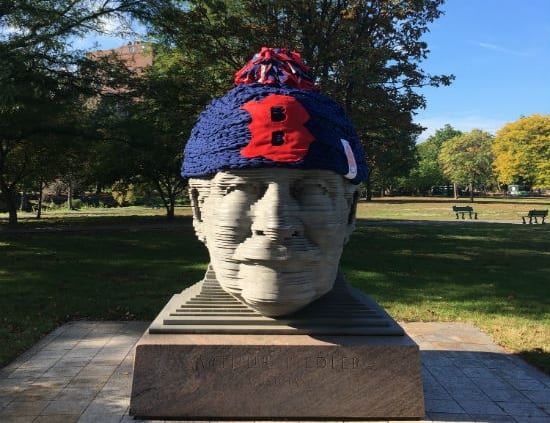 FOR IMMEDIATE RELEASE (OCTOBER 10, 2018) – BOSTON, MA – To cheer on the Red Sox as they begin the American League Championship Series and to celebrate their franchise-record winning season, the Esplanade Association, nonprofit steward of the 3.2 mile Charles River Esplanade in Boston, has collaborated with local company Sh*t That I Knit for a monumental tribute: on the morning of Wednesday, October 10, the two groups installed a 17-foot-wide, 7-foot-tall knit hat on the Arthur Fiedler statue.

Arthur Fiedler, beloved long-time conductor of the Boston Pops, is honored with this statue for the role he played in bringing outdoor music to the Esplanade—a legacy that lives on today at the annual Boston Pops Fireworks Spectacular, which attracts an estimated half-million people to the park each year. The statue is located a short walk from the Hatch Shell Oval, part of the Charles River Esplanade, over which the Massachusetts Department of Conservation and Recreation (DCR) has care, custody, and control.

“Two of Boston’s greatest traditions—Red Sox baseball and the Boston Pops—have ties to the Esplanade through the Teddy Ebersol’s Red Sox Fields and the July 4th concerts at the Hatch Shell,” said Michael Nichols, Executive Director of the Esplanade Association. “We are proud to celebrate the Red Sox and send our wishes for a deep playoff run by linking the two traditions with an homage as grand as Arthur Fiedler’s legacy.”

“As a Boston-based company, we’re very excited to partner with the Esplanade Association and root for the Sox,” said Christina Fagan Pardy, Founder & Chief Knitting Officer Sh*t That I Knit. “This was a really fun, creative project – a great way to show off our (newfound) arm knitting skills!”

“My father was a Red Sox fan and I often joined him at Fenway Park for games. I’m sure he would approve of the donning of a Red Sox hat, especially this year,” said Peter Fiedler, son of legendary Boston Pops conductor Arthur Fiedler.

We wish the Red Sox well as they ‘Do Damage’ the rest of this postseason!

The Esplanade Association is a 100% privately funded nonprofit organization that works to revitalize and enhance the Charles River Esplanade, sustain its natural green space, and build community in the park by providing educational, cultural, and recreational programs for everyone. Working in collaboration with the Massachusetts Department of Conservation and Recreation, the Esplanade Association is dedicated to improving the experiences of the millions of visitors who enjoy Boston’s iconic riverside green space.

About Sh*t That I Knit (shitthatiknit.com)

Sh*t That I Knit is a knitwear company based out of Boston, MA. Each piece in their knitwear collection is of the highest quality and is knit with hand-dyed Peruvian merino wool, alpaca, or cashmere.