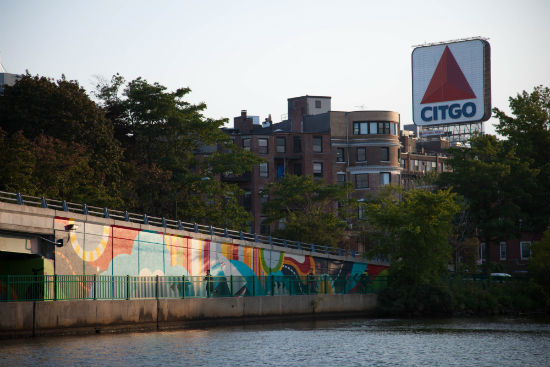 August 28, 2018 – Boston, MA – A bright and lively art mural will remain on a heavily-trafficked stretch of the Charles River Esplanade just west of the Massachusetts Avenue Bridge for another year, thanks to a recent permit extension granted by the Massachusetts Department of Transportation (MassDOT). Patterned Behavior, the Esplanade’s first privately-commissioned public artwork, was completed in summer 2017 by artist Silvia López Chavez. The Esplanade Association, an independent non-profit that works in partnership with the Massachusetts Department of Conservation and Recreation (DCR) to revitalize and enhance the state park, hired Now + There to curate and produce the mural.

Patterned Behavior was intended to enliven a concrete-heavy portion of the park and reduce graffiti vandalism. The vibrant and playful design is enjoyed by the thousands of people who utilize this section of the Esplanade every day, including commuters on Storrow Drive, bicyclists, boaters, rowers, runners, and pedestrians.

The mural debuted to critical acclaim, both for its cheerful appearance and for the majority female crew responsible for its creation. “Bright aquas, yellows and oranges make a strong contrast to the solemn grays and subdued browns… And they bring a fresh look to this dark section of the bike path, often riddled with graffiti,” wrote Alexa Vasquez in WBUR’s the ARTery. As part of a larger series—Now + There’s Year of the Woman campaign—Patterned Behavior was named to Best of 2017: Our Top 20 Exhibitions Across the United States by popular art forum Hyperallergic.

Although the response to the mural from neighbors and park visitors has been overwhelmingly positive, the permit for the piece was set to expire in summer 2018. Had a permit not been granted by MassDOT, the area of Bowker Overpass which connects the Charlesgate area to Storrow Drive would be been reverted back to a gray, graffiti-ridden wall. Now, Patterned Behavior will be on view until July 18, 2019.

Patterned Behavior ties into the Esplanade Association’s broader efforts to increase arts and cultural programming in the park. In 2018, with funding from The Boston Foundation, the Esplanade Association launched GroundBeat: the Esplanade’s Free Riverfront Music Series to showcase art- and music- producing organizations throughout the region in a variety of thoughtful, flexible venues along the Esplanade. Next up in the series, Celebrity Series of Boston will produce Jazz Along the Charles: A Walkable Concert on Sunday, September 23 from 2:00pm to 4:00pm, featuring 25 jazz ensembles in 25 locations throughout a two-mile loop of the Esplanade.

For more information on the Esplanade Association’s arts and culture offerings, including more about Patterned Behavior, visit esplanadeassociation.org.

About the Esplanade Association (EA)

The Esplanade Association is a 100% privately-funded nonprofit organization that works to revitalize and enhance the Charles River Esplanade, sustain its natural green space, and build community in the park by providing educational, cultural, and recreational programs for everyone. Working in collaboration with the Massachusetts Department of Conservation and Recreation, the Esplanade Association is dedicated to improving the experiences of the millions of visitors who enjoy Boston’s iconic riverside park. For a full list of Esplanade Association events and activities, visit esplanadeassociation.org.

With roots in the Dominican Republic, interdisciplinary artist Silvia López Chavez has based her studio and social art practice in the Boston area for over fifteen years. Chavez’ work is informed by her personal experiences as an immigrant, a woman of color, an educator, artist and designer. Her work investigates the basic human need to connect with one another on multiple levels: socially, politically and culturally. She explores the intellectual and emotional narratives of joy, struggle, acceptance, and assimilation that affect one’s daily life. Chavez is motivated by the power of the creative process as an agent for positive change. Her collaborative works with community partners include mural commissions, site-specific installations and pop-up interactions within Boston, Cambridge, Newton, Chelsea, Lynn, Salem, Beverly, Danvers, and Marblehead. Chavez has supported the artistic development of high-school female artists through her work with them on public art projects, and believes mentorship can help shape young women’s lives. In addition to her fine art practice, she is an award-winning design professional, working with corporate and non-profit clients such as Museum of Fine Arts, Boston; Boston Children’s Hospital; World Health Organization; World Bank; and Bill & Melinda Gates Foundation. (www.silvialopezchavez.com)