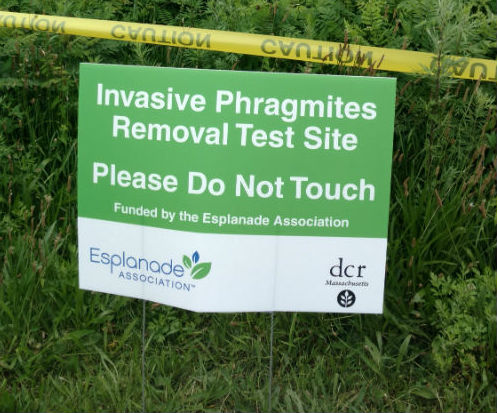 In October*, SOLitude Lake Management, in partnership with the Esplanade Association, treated invasive Phragmites or “Common Reed” in the Park. Phragmites are an invasive species that originally came to the U.S. from Europe in the 1800s. Phragmites is a fast growing reed which can produce thousands of seeds each year, regrow from broken root fragments, and can reach up to 15 feet tall! This invasive species has spread through the East Coast and is now a threat along the shorelines of the Charles River. Phragmites form dense mats that exclude native plant species and do not provide shelter or food for wildlife. They also block views of the river from the Esplanade.

In order to combat the spread of Phragmites, SOLitude lake management came into the Park to apply several different treatments such as cutting, laying tarp, and applying herbicide to Phragmites in three locations. Instead of applying the herbicides by spray, SOLitude wiped the stems and leaves of the Phragmites with the herbicide. This will minimize the amount of herbicide that gets into the surrounding environment.

Two weeks after the treatments, the Esplanade Association will take soil and water samples to monitor the presence of herbicides in the treatment area. The findings of this pilot project will have important repercussions for how the Department of Conservation and Recreation (DCR) and other local parks agencies manage Phragmites and stop its constant spread through our Charles River.

Funding for this study is generously provided by the Merck Foundation. 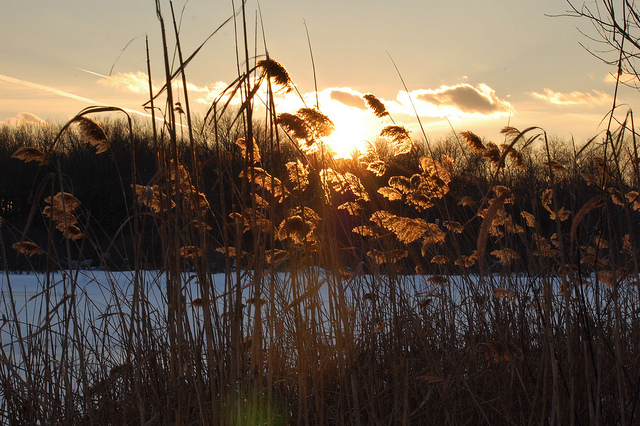 *Note as of October 11: We previously announced that this work would be taking place on September 5, however it was been delayed.

What’s in that tank?
Scroll to top