With the help of curator, Now + There, and local artist Silvia Lopez Chavez, this first-ever professional mural in the Park echoes the beauty, diversity, and energy of the Esplanade and life along the Charles River. In addition, it: 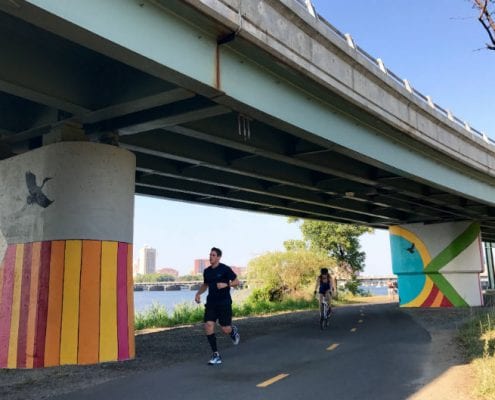 al design was vetted by major stakeholders, including the Landmarks Commission, the Boston Art Commission, community organizations, and neighbors.  It was completed in September 2017 and is intended to remain in place for a year, with the possibility of extension. The mural is titled Patterned Behavior and was designed by Sylvia Lopez Chavez, an award-winning artist who has worked in the Boston area for over 15 years. It reflects the relationships and patterns created by human interaction with the space and the busy intersection of water, land, and sky. The mural is a joyful and contemporary piece reflecting how the park has grown and changed since its dedication over 100 years ago.

The mural is actually a set of images that cover support walls and pillars on the Bowker Overpass which connects the Charlesgate area to Storrow Drive. The elements grow as you approach the overpass – starting simply on the pillars and growing in depth, detail, and vibrancy to full coverage on the underpass wall facing the river. Bright colors and bold graphics represent the energy of the Esplanade – a celebration of the Park and all the ways it serves residents and visitors of Boston.

Please support public art in the Park with a donation to Esplanade Association today!

All photos used on this page are provided courtesy of Pam Steel.