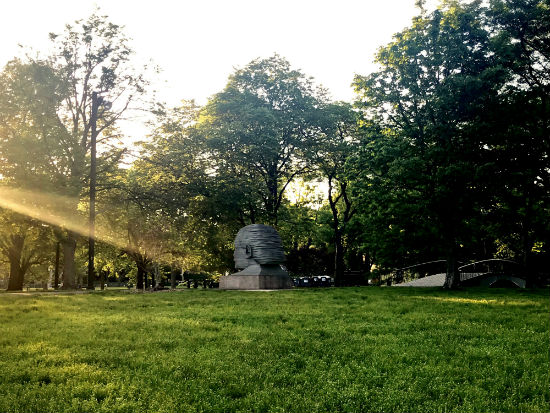 My name is Michael Nichols and I am Executive Director of the Esplanade Association in Boston and also a resident of the Audubon Circle neighborhood here in the city. I wish to thank Councilor Pressley for her timely hearing order on this subject, Chairman O’Malley for calling this hearing, and each member of the Council gathered here today to discuss an issue that does not get enough attention in Boston and beyond.

The Esplanade Association (EA) is a 17-year-old nonprofit that is 100% privately funded and works to revitalize, maintain, program and enhance the historic 64-acre Charles River Esplanade in partnership with the Massachusetts Department of Conservation & Recreation (DCR). EA has grown to now contribute over $1 million per year into the park, much of it in organic horticulture, vegetative management, planting ornamental gardens, lawn maintenance, tree care, and – most recently – tree succession planning.

While the recent Boston Globe article on Boston’s tree canopy focused mostly on tree coverage on city-owned property, we need to be contributing to enhanced plantings throughout the City, regardless of who owns the land. The advantages of significantly more trees in Boston are numerous and I’m sure will be covered today, though its worth highlighting that every citizen of Boston benefits from fresher air, cooler temperatures, stored and filtered stormwater run-off, and so much more due to widespread tree coverage.

Since then, the Esplanade Association and several of our funders have partnered to commence semi-annual tree pruning efforts that improves the health of roughly 20% of the Esplanade’s tree canopy each year while also making the park safer for visitors. This and other care provided by EA has led to significant growth to trees throughout the Esplanade, which in turn heightens their ecological benefits to the public.

Still, our inventories also revealed that the majority of the Esplanade’s trees are considered ‘Mature to Over-Mature.’ Essentially, our 100+ year-old park would have trouble maintaining its current tree coverage levels absent an intervention.

Last year, the Esplanade Association commissioned a tree care management and succession planning study to understand what’s needed to continue – and grow – healthy tree coverage on the Esplanade for generations to come. The draft results of that study were released earlier this month and are available on our website, esplanadeassociation.org. The study’s recommendations will lead the Esplanade Association (and anyone who would like to partner with us) to reinvigorate our tree canopy in the spirit of Olmstead’s, Eliot’s, and Shurcliff’s original intent, using modern technology and enhanced scientific knowledge of leading tree care practices. We will work to lessen foreseeable negative impacts on our trees, select diverse species of trees that are expected to fare better in our temperamental New England climate, broaden public education efforts aimed at tree protection and communicating the ecological benefits of our trees, and commit ourselves to providing the critical early-life care that all new trees require.

If there is one lesson from this story, it’s that there are willing participants out there beyond constrained public sector budgets to support this broader effort. Now, don’t get me wrong… the State, through DCR, and the City, through the Parks Department, should be leading the charge and each should take a much greater role in the equitable growth of tree coverage in parks and neighborhoods throughout Boston. But with public-private partnerships of the type the Esplanade Association enjoys with DCR, we have an opportunity to learn from one another and broaden the impact of a shared desire to build Boston’s tree population for decades to come. Thank you for your time and attention to this issue.

https://esplanade.org/wp-content/uploads/2018/07/Golden-hour-Fiedler-Head-and-green-lawn-Pat-Arroyo-small.jpg 413 550 esplanadeadmin /wp-content/uploads/2016/07/esplanade-logo-white.png esplanadeadmin2018-07-03 11:09:232018-07-03 11:09:23Testimony re: Docket #0591 (Hearing Order to Discuss and Assess the Amount and Quality of Tree Coverage in the City of Boston)
Esplanade Association Announces GroundBeat: The Esplanade’s Free Riverfront...

FREE FITNESS ON THE ESPLANADE KICKS-OFF ON TUESDAY, JULY 10
Scroll to top