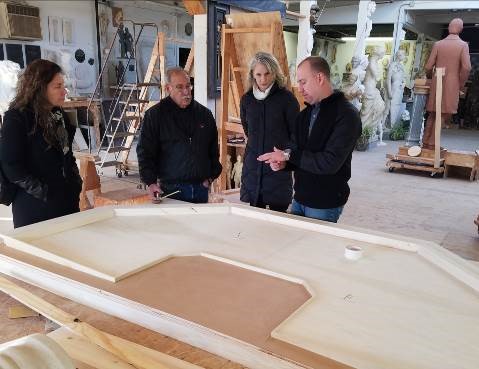 Walking into Skylight Studios in Woburn is like stepping back in time. Plaster casts of classical sculpture, clay models, working sketches, and new work fill the old warehouse-turned-studio where Robert Shure and his staff make art. Skylight will be creating bronze elements for the Lotta Fountain restoration project. The studio is the newest leaf in the family tree of Boston artists who created some of the most memorable works of public art in the City.

Robert Shure apprenticed at the commissioned sculpture studio of Casieri DiBiccari, Inc., founded in 1952 by Arcangelo Casieri (1902-1997) and his brother in law, Adios diBiccari (1914-2009). Cascieri was born in Italy, and his father relocated the family to East Boston in 1906. Forced to leave school to work, Cascieri became skilled at woodcarving and was eventually asked to be an apprentice to Johannes Kirchmayer, chief sculptor at W.F. Ross Studio in Cambridge. Cascieri eventually graduated with a sculpture degree from the Boston Architectural Center, where he later served as Dean from 1943 until his death in 1997.

Adio diBiccari, Cascieri’s partner, connects the studio to some of Boston’s greatest artists and to the School of the Museum of Fine Arts, where Katherine Weems, sculptor of Lotta Fountain, would later train. Beginning in 1932, Adio studied under Frederick Allen, who had trained at the Museum School under Bela Pratt (1867-1917). Pratt’s most notable works include the bronze figures of Science and Art outside the Boston Public Library. Pratt’s teacher and mentor was Augustus Saint Gaudens (1848-1907), one of America’s most famous sculptors and creator of the Robert Gould Shaw Memorial on Boston Common.

Shure and his team will create the new basin, activator, and bronze caps using the same craftsmanship and care that produced some of Boston’s most beloved sculptures. As Lotta Fountain enters her next phase of life, she remains linked to Boston’s sculptural heritage through the traditions and techniques curated at Skylight Studios.

For a complete history of the studio, visit http://skylightstudiosinc.com/studio-history/.