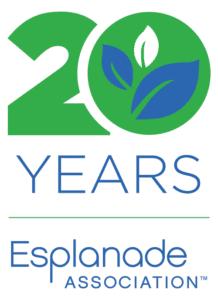 The Hatch Shell is an iconic Boston landmark that unites and enriches the Boston community with vital arts, culture, and much needed green space.

Over the years, constant exposure and overuse had placed a toll on the Hatch Shell structure and surrounding area. In response to the pressing need to restore and repair this vital area, the Esplanade Association launched a campaign to raise funds, and in partnership with the DCR, began the work in the fall of 2013 to overhaul the Hatch Shell Oval Lawn.

The restorations included Hatch Shell Oval Lawn being recomposed with a uniform drainage system that appropriately protects the groundwater table beneath it, and an environmentally responsible state of the art irrigation system that will provide much needed water both to the new, high-use turf and to the soil to help it resist compaction. In addition, electrical and mechanical conduit hooks were installed to improve and modernize infrastructure for music and video performances.

This marks the completion of the first phase of the $4M capital campaign to fund the restoration of the DCR Hatch Memorial Shell Area on the Charles River Esplanade. The restoration project is occurring in three phases with the next projects to include modernizing its sound and lighting systems and enhancing and rebuilding its structural elements in conjunction with the DCR.

We invite you to join us and share our vision of making the Esplanade a thriving, safe, accessible park where people come together to share, explore and enjoy nature and community.

Our donors make our park vibrant! With your support we sustain the lush gardens, protect the urban tree canopy, enliven the park with free programming, and advocate for improvements throughout the park.

Learn more on how to support the Esplanade Association and donate to our Annual Park Fund here.