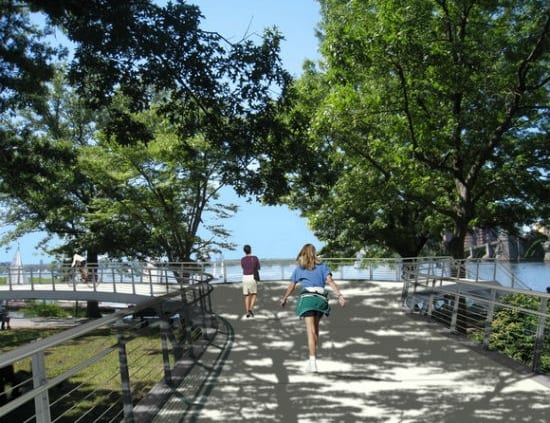 The new Frances ‘Fanny’ Appleton footbridge will open to the public at 6:00am on Saturday, September 1, 2018, providing a universally-accessible link from Charles Circle to the Esplanade. Part of MassDOT’s larger Longfellow Bridge Rehabilitation Project, the footbridge is beautifully designed by Rosales + Partners to offer views of the Longfellow Bridge, the Esplanade, and the Charles River. During the planning process for the Longfellow Bridge, representatives from the Esplanade Association successfully advocated for this vital connection to the park, in addition to suggesting the footbridge’s final name. The Fanny Appleton footbridge is named for the beloved wife of one of America’s greatest poets — Henry Wadsworth Longfellow. Their love story provides a colorful look at life in 19th Century Boston.

Fanny Appleton was a talented artist who enjoyed collecting art, was an avid reader, and corresponded almost daily with family and friends about her life in Boston. She was the daughter of the prosperous merchant and politician, Nathan Appleton (one of the founders of the City of Lowell) and lived at a townhouse at 39 Beacon Street in the Back Bay much of her early life.

Longfellow met Fanny during a ‘Grand Tour’ of Europe in 1836 and was immediately enamored by her intelligence, beauty, and love of literature. Upon their return to Boston, he walked 1.5 hours almost once a week for a year from Craigie House in Cambridge (formerly George Washington’s Revolutionary War headquarters; today a National Park Service property) across the West Boston Bridge (today the Longfellow Bridge) to visit her.  He courted Appleton with poetry and flowers and published a book called Hyperion: A Romance about his feelings for her. Her rejection left him so broken-hearted he had to take a leave of absence from his work as a professor of Modern Languages at Harvard.

In April of 1843 they were unexpectedly reunited at a party after many years apart and everything changed. She told him his feelings were returned in May of that year and they were wed within two months. The poem The Bridge (quoted below) describes Longfellow’s long-time misery with unrequited love as he crossed the Charles River to see Appleton, contrasted with his joy when he went to visit her after she finally agreed to marry him. Together, Appleton and Longfellow led a happy life on Brattle Street in Cambridge, raising five children together. “She never came into a room where I was without my heart beating quicker, nor went out without my feeling that something of the light went with her,” he wrote about their marriage.

Over 150 years later, in the early stages of the Longfellow Bridge planning process, MassDOT created a Task Force with representatives from the community to help guide the project. Representatives on behalf of the Esplanade Association included Herb Nolan (then EA-Board member, now Executive Director of The Lawrence & Lillian Solomon Foundation), Fritz Casselman (EA Board Member), and Margo Levine Newman (former EA Board Chair). They began to advocate for a new footbridge to improve connections to the park and the Paul Dudley White Bike Path. After sustained advocacy — including presentations to the Task Force, meetings with MassDOT project managers, and collaboration with other local advocacy groups — the new ADA-compliant pedestrian bridge was eventually approved.

The idea of what to name the bridge came soon after. Since the Longfellow Bridge is named for Henry Wadsworth Longfellow, Nolan and Casselman suggested that naming the pedestrian bridge for Longfellow’s wife would be a touching way to honor their love. They believed it would also help address the disparity between bridges named for men and bridges named for women in Massachusetts. With the support of Representative Marty Walz, and eventually Representative Jay Livingstone, the bridge would officially bear Appleton’s name.

Appleton died in a tragic accident in 1861 when her dress caught fire. Longfellow was so badly burned trying to rescue her he was unable to attend her funeral. The pain of her loss haunted Longfellow for the remainder of his life. “These eighteen years, through all the changing scenes/ And seasons, changeless since the day she died,” he wrote about his unending mourning in the unpublished poem Cross of Snow.

Beginning this September, the two bridges—Longfellow and Fanny Appleton—will be open side-by-side near the entrance to the West End where their romance first began. The Fanny Appleton footbridge will undoubtedly carry many lovers across Storrow Drive to spend time walking the riverfront paths of the Esplanade together.

Yet whenever I cross the river

On its bridge with wooden piers,

Comes the thought of other years.

And I think how many thousands

Each bearing his burden of sorrow,

Have crossed the bridge since then.

–The Bridge by Henry Wadsworth Longfellow